With iPadOS 16, Apple introduced Stage Manager, a feature designed to improve multitasking through a Mac-like multi-window experience. Apple also added full support for external displays, so for our latest YouTube video, we thought to test these two features on the display MacRumors Readers How is the iPad experience in iPadOS 16. 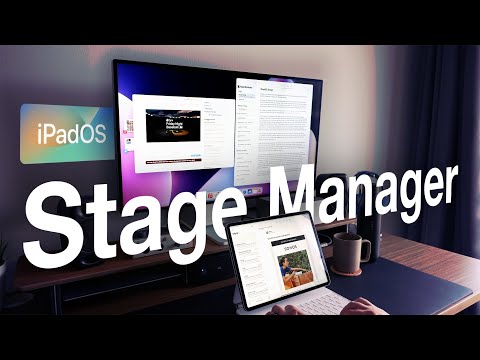 Stage Manager and external display support are both limited to iPad Pro and iPad Air models equipped with M1 chips, which only includes the latest Apple devices. Apple’s decision to limit Stage Manager to 1M1 iPads has been highly controversial because so many people have older iPads and can’t use some of the best multitasking upgrades we’ve seen in years, but Apple has made sure that Delivery was not possible. Acceptable experience Multitasking on an iPad that doesn’t have the power of the M1 chip.

If you’re lucky enough to have an M1 iPad Pro or M1 iPad Air, Stage Manager is a useful multitasking upgrade. You can activate it via Control Center and once activated, you will see a tiled view of your open apps on the left side of the app with the main app available in the center.

You can freely resize and move windows around on the iPad, which is a whole new experience. Previously, Split View and Slide Over were the only multitasking options available and limited to two apps or app windows at a time.

Stage Manager works with the aforementioned external display support, and that’s where the feature shows itself best, allowing for a Mac-like experience. With just one iPad, Stage Manager is able to handle up to four apps at once. one at a time, but with an external display, you can use up to eight.

iPadOS 16 allows the iPad to take full advantage of the external display instead of mirroring it, and it’s like using the display with a Mac. in MacOS.

Stage Manager isn’t perfect, as we’re still in the early stages of the beta testing process, so some apps don’t work well on external displays, but Apple has plenty of time to improve and update. Stage Manager is likely to be a more enjoyable work experience for those who prefer to use an iPad rather than a desktop, but it’s a shame that it’s limited to the new iPad.

Have you tried Stage Manager? Tell us what you think about it in the comments below.

Gurman: The iPhone 14 Pro will always have...

Apple is said to be testing the iPhone...

Parallels Desktop for Mac updated with...